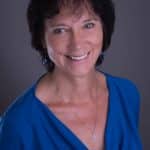 Barbara is originally from Penticton, BC and has lived and worked in communities throughout southern British Columbia, Manitoba, the Yukon Territory and also in Seoul, Korea, where she taught English as a Second Language (ESL).

In receiving her Master of Social Work (MSW), Barbara Halcrow attended the Universities of Victoria and Manitoba. Barbara has worked in a wide range of social service and therapeutic arenas, in rural and urban communities throughout her career that included: child protection and family counselling, domestic violence, sexual abuse, mental health and addictions, people with disabilities and adult and older adult health issues.

The healthcare arena in Vancouver, BC was the most recent career shift for Barbara where she worked over a 15 year period throughout acute care, rehabilitation and community sectors.

While in healthcare she also held several leadership positions that included, Social Work Clinical Practice Leader At GF Strong Rehabilitation Centre, as the Professional Practice Leader of Social Work in Richmond, BC; the Family and Social Support Consultant at both Three Bridges and Raven Song Community Health Centres and finally as the Team Leader of Home Health at Raven Song Community Health Centre in Vancouver, BC.

Throughout the years Barbara also kept her focus on advancing her spiritual learning and development by taking healing energy teachings in the communities she lived in. She also studied some advanced methods such as the “Melchizedeck Method” from the Kamadon Academy in Australia. Barbara also attended The Arthur Findlay College in Stansted, England, a world-renowned institution for Psychic Development and Mediumship. Additionally, Barbara completed a 2nd level in Reiki healing in Vancouver.

In 2011 Barbara Halcrow ventured to write her first book, a partial memoir called “Spiritual Intelligence, How Your Spirit will Lead You To Health, Happiness and Success” (Expert Author Publishers, Coquitlam, BC).

Her second, most recent publication entitled, “ULTIMATE SELF-CARE, A Holistic Guide For Strength and Balance In Changing Times” (Austin Macauley Publishers NY, USA, 2018) was a heartfelt, longstanding passion in terms of Barbara wanting to offer more practical help and nourishment from a fuller mind, body spiritual perspective, for all those who spend much of their personal or professional time giving care to others – as well as for anyone, anywhere, who simply wants to improve their own self-care practices.  Barbara’s plan is to write a third book – so stay tuned.
Website: www.BarbaraHalcrow.com
e/m: Barbara.Halcrow@gmail.com
C: 604-999-3116
Facebook only: Barbara Halcrow