On the Gaea Star Crystal Radio Hour,  singer/songwriter Mariam Massaro and composer/producer Robert Sherwood collaborate with Craig Harris and special guests to produce a unique live musical experience where pure inspiration is interwoven with dynamic and unusually sensitive musical expression. The show features completely original songs created in the moment from Mariam’s inspirations, often from dreams and feelings based on current life experiences here and throughout the world as well as from the beauty of nature,  blended with intergalactic channelings from her Twin Flame lover Ashento. Starting in January 2012 The Gaea Star Crystal Radio Hour has attracted over 350,000 listeners from all corners of the globe.  As The Gaea Star Band enters their fourth year they’re excited with the release of their latest album “Who We Are” on Applehead/Sony Films and Records.  “Who We Are” is a unique collection of tracks pulled from the last couple of years of shows that reflect an upbeat, original spirit with a global medicine rock flavor. 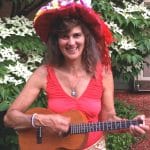 Today on The Gaea Star Crystal Radio Hour we present a vibrant show from spring of 2019-  Gaea Star Crystal Radio Hour #353 is an hour of visionary acoustic improv music featuring the Gaea Star Band with Mariam Massaro on vocals, native flute, ukulele, 12- and 6- string acoustic guitars and celtic harp, Bob Sherwood on piano and Craig Harris on congas and native drums.  Recorded on a warm but overcast May day at Singing Brook Studio in Worthington, Massachusetts, today’s show begins with the soulful and meditative “For The Blessing Of Life”, a lush prayer to hope featuring gorgeous native flute from Mariam and spacious, jazzy piano figurations from Bob.  “Alchemical Words” is a deeply beautiful improv piece about the power of words featuring the best from everyone in the combo; Craig’s steady, authoritative congas, Mariam’s praise-filled lyric, lush vocal and chiming 12-string acoustic, and Bob’s imaginative and questing piano work.  “Into The Morning We Sail” is driven along by Mariam’s ukulele and mystical lyrics and is a meditative, minimalist piece that leads into the bittersweet innocence of “May We Start All Over Again”, another languid, gorgeous piece featuring a lovely, fragile melody from Mariam.  We conclude today’s show with lovely and assured takes of three of Mariam’s recorded songs, the hopeful, deep “Restore”, the bittersweet and deeply emotional “Rainbows” and the always fun and joyful “Pele”. 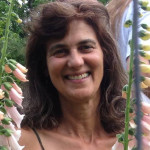 Gaea Star Crystal Radio Hour #518 is an hour of visionary acoustic improvised music played live by the Gaea Star Band in early January of 2023.  Recorded at Singing Brook Studio in Worthington, Massachusetts, today’s show features Mariam Massaro on vocals, Native flute, ukulele, shruti box, harmonica and percussion, Bob Sherwood on piano and Craig Harris on Native drums and congas.  We begin today’s show with the driving, energized, inspiring “At Last”, a dramatic, bright song featuring fine work from the whole ensemble built on Craig’s powerful heartbeat.  Mariam ushers in the beautiful, mystical “Cradle Me” with Native flute and shruti box and Bob takes up a circular gospel figure as the song settles into a hushed yet powerful prayer.  “Earth Dwellers In The Rain” is a hushed, intense song built on an unsettled, stormy piano cadence from Bob that recalls rain, mist and shifting winds.  “All Float Away On A Moonlight Night” is a rocking, evocative take on that most iconic subjects of Mariam’s lyrical interest, namely the Moon.  This beautiful, hypnotic song features a gorgeous vocal, driving rhythm from the band and imaginative, mesmerizing piano figures from Bob that pull the song ever deeper into the vortex of funk.  “Eternally Trusting” is a delicate, wintery, drifting piece with a frosty piano ostinato from Bob woven through Mariam’s precise, chiming ukulele and Craig’s heartbeat congas and “Open Wide To Receive” is an aching, beautiful nursery rhyme of a song distinguished by a lovely, drifting vocal from Mariam  We finish today’s show with a powerful, tight reading of Mariam’s classic island song “Pele”, delivered with fire and assurance from the whole group, built around Mariam’s tight, punchy soprano ukulele. 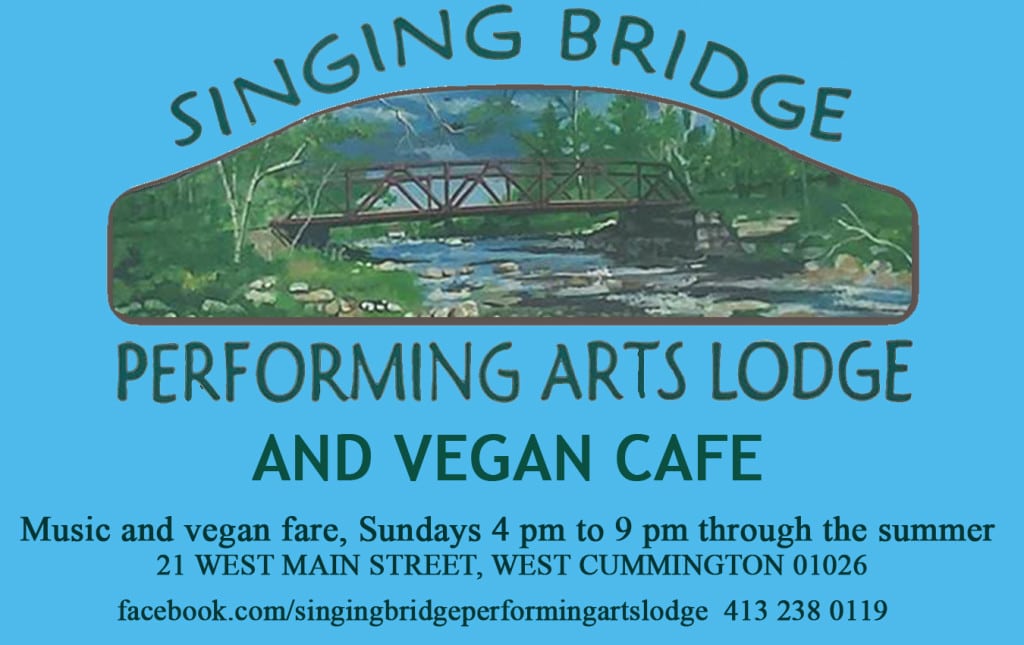 The Gaea Star Crystal, Awakening the Tribes of Light, book 1, is a celestial adventure when the earth’s, (known as Gaea Star) whalesongs are heard throughout the universe, seeking help to save her elemental resources from the uncaring greedy ones bent on taking everything without regard for her beauty.

The Archangels, Michael and Gabriel summon all those sympathetic to Star Sirius for a momentous meeting, where the council chooses a gifted brigade of Light-workers to serve on the first wave to the precious earth, to help humanity awaken to their true spiritual dynamic powerful selves to restore harmony.

All of the beings of love and light, the angels, fairies, unicorns, and ancient elders bless the brigade with their wise teachings, crystals and guiding support from afar. A timeless twin flame love story with Ashento, an ascended master and one of the lightworkers, is woven in and of course the shadow forces attempt to stop the quest by infiltrating into the mission to sail to Gaea Star.

Blessed by Light-Filled Love, the Celestial Teachings of Ashento by Mariam Massaro, is an autobiography of her awakening as a spiritual medicine healer and creatress of the arts. Mariam meets her Twin Flame, Ashento, an ascended being from the celestial realms, who has been united with her in love for eons. Ashento’s deeply spiritual teachings are heard by Mariam as a gentle voice that speaks through her waking and in her dreams. Ashento is dedicated to guiding humanity through this powerful time of great change and awakening on the Earth. This is a powerful fascinating true story of Mariam discovering how to work with spiritual inspiration to manifest a positive uplifting radiant life as a way-shower, as an open, expressive, loving happy and fulfilled being. Blessed by Light-Filled Love guides your life journey in discovering your true empowered self. 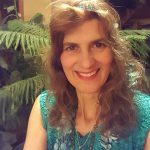 BIO: Mariam Massaro is a dynamic visionary singer/songwriter and ceremonial medicine healer, who passionately expresses messages of love and inspiration, through her unique evocative, rock style music and flamboyant theatrical performances. Her powerful songs encourage humanity to nurture Mother Earth (Gaea Star), to be happy and to discover your own power and radiant light within. Mariam channels spiritual messages and songs from her twin flame, Ashento, an ascended master and is currently co-writing  The Teachings of Ashento with him. The following is a message from Ashento. “As a messenger of spirit, be the hands, the voice, the touch, the example of love to shine, to reflect the deep abiding love that flows eternally from one’s spirit into life, to heal and spread love even more. To enlarge the capacity for revealing love at all times is to walk the path of the peaceful messenger.” She wrote and is currently filming the Gaea Star Crystal screenplay with Ashento’s celestial guidance. Her first CD, released in 2009, “Gaea Star Crystal -Awakening The Tribes Of Light ” is a uplifting collection of songs for the movie soundtrack. Her second CD, “Gaea Star Goddesses”, recorded in her own studio, was released on 11/11/11. It is a beautiful celebration of the Divine Feminine with her original songs about the magnificent Goddesses of Gaea Star that have touched her life in all her worldly travels. Mariam has spent the last year creating and directing the colorful, live musical Gaea Star Goddess show that brings these songs to life while evoking the beauty and wisdom of the Goddess.

She is the lead vocalist and bandleader of the GaeaStar Goddess band. She invites audiences of all ages, male or female, to embody their own God or Goddess within by dressing up and participating in the songs. Her radiant elaborate crowns and flamboyant creative costumes add the sparkle of expressive expanding consciousness, sensuality and artistic beauty. Mariam released her third CD, “Smooth Sailin’ Love Songs” in October, including songs co-created with Ashento, Dameron Midgett, and Robert Sherwood. She plays many different instruments and sings all her own harmonies. The music is an upbeat, intense weaving of rock, tribal rhythms and inspirations from nature. Mariam also co-hosts a weekly live radio show with her original music with Robert Sherwood and Dameron Midgett, using a diverse selection of instruments including harp, tamboura, piano, guitar, banjo, fiddle, dulcimer and the sounds of nature from her own back yard. The show is ”The Gaea Star Crystal Hour” on Dreamvisions 7 Radio Network, a syndicated Internet Radio Station.

Mariam Massaro is a visionary creatress and owner of WiseWays Herbals, an internationally distributed company of natural products for well-being made at Singing Brook Farms in Worthington, MA.  She founded the Singing Bridge Performing Arts Lodge in Cummington where art and music is created in a fabulous river front sting. Years into her career as an organic herbal farmer, Mariam started The Sacred Earth Medicine Healing Center using Native American tradition ceremonies with native healers from the North and South Americas. Her studies in native traditions have led Mariam around the world and down new paths of creative and healing musical expression. As her passion for singing grew, she developed a unique style of music weaving ancient tribal chanting with a contemporary sound.