The Truth about Knowledge 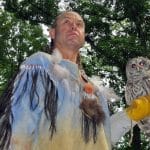 Today we will be exploring with our featured guest Chris White, The three places God and we observer where Science has come a point beyond physical prayer, meditation, voice: speaking also how Water and Food carry Knowledge … Where does this knowledge come from & how can the knowledge from food and water make a difference?

About Chris White
Between 2008-2009 Chris received a prophetic dream of one tribe of people coming together that pleased Great Spirit and reached backward and forward in generations.

“One Tribe, One People”
The first of these people would be Native Americans in spirit, but include people from every race, religion and background.
The premise is that these people would come to an understanding of the “Native Way” of life:  love and revere the Creator; which includes respecting creation, i.e., “Mother Earth;” and the revelation of “Yeshua,” “Messiah,” “Jesus Christ,” “The Great Mystery,”

“Father,” “Creator God;”  and Love “Human-hood,” i.e. love your neighbor as if it were yourself.
Chris’s dream told him to tell three native spiritual elders about this short story that he was given.
Then Chris learned of Quanah Parker Comanche Chief, who, when was seriously wounded, had a vision of Jesus Christ who instructed him to make peace.
After making peace, Quanah Parker later founded the Native American Church, which the foundation is Native American spirituality and Christianity.

What is Native American spirituality: creation, nature, the Great Spirit in all things.

What is Christianity: belief that Jesus Christ the Son of God, thorough which all things created were created.

This led Chris to James Warren (Flaming Eagle) Mooney Seminole Elder, Medicine Man and co-founder of Oklevueha Native American Church who is the Priory of the Indigenous People Under the Grand Priory of the United States of America for the Hospitaller Order of Saint Lazarus of Jerusalem.

Through sacred ceremony with Mooney, Mooney blessed Chris with the first independent branch of Oklevueha Native American Church of Virginia in 2009. Chris stated he was taken back when elder Mooney prophesied that millions of people would be reached through the church in Virginia. The medicine Chris carries is from Great Spirit and not of his own. One word to describe Chris is “deliberate.” His spiritual charge is, “Keeper of the Word.”

“The wind blows where it wishes. You can hear the sound of it. But cannot tell where it comes from and where it is going. So is everyone who is born of the spirit,” – John 3:8  http://sanctuaryonthetrail.org/chris.html