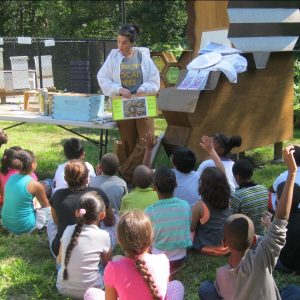 Local senator Valarie Lawson and local representative Terri Cortvriend have introduced the 2021 Climate Literacy Act in the Rhode Island State House. The bill proposes developing a set of key environmental, climate, and sustainability principles and concepts to be infused into all science, civics and social studies courses from kindergarten through grade twelve. Quoting from the text of the bill: “A survey conducted by the Kaiser Family Foundation found that nearly half of American teenagers say they have learned either little or nothing about the causes or ways to reduce the effects of climate change, and that the number of teenagers who say they are being taught in school about how to mitigate climate change appears to be on the decline. Sixty-one percent (61%) say the issue of climate change is very or extremely important to them personally.”

Students in this year’s Environmental Science class at East Greenwich High School were given the text of the bill to read and consider. These students have been exploring topics such as air and water pollution, population analysis, solid waste management and conservation of natural resources. Their coursework provided them with a context that enabled them prepare meaningful responses to the reading.

One East Greenwich High School student wrote the following: “Learning about something as urgent and prevalent in our society as climate change is vital for young people. I think it is something the government should follow through with because we are the future of the world. We will be eventually taking charge of important decisions like voting or we may even be the people deciding to pass bills in congress. It is important to understand all aspects of the problems in our world to make informed decisions that benefit our world for the better. Being taught this at a young age when most of my classmates have admitted to not knowing anything before the curriculum introduced climate change to them, is very important. Maintaining literacy on current events helps us grow to be informed adults that will make the future of our planet more healthy. It will also evoke more interest and care for our planet which will be better in the long run for us and for nature itself. There’s no reason why we can learn about history and not learn about our world today. Every single section on the proposed bill should get approved.

A second student wrote: “I think that overall this bill is a good idea, but including climate change in classes such as math might not work very well. Certain classes, like science or social studies, can probably incorporate climate change into their curriculum pretty well, but it’ll be harder with other classes, such as English or math. Also, I agree that it’s important to learn about climate change early on, but trying to teach it to kindergartners may not work very well. They may not absorb anything from that type of curriculum at that age, making the lessons ineffective.”

A third student wrote: “I think this is a great idea. On the other hand, I would suggest teaching younger students about climate change. This way it is engraved in their heads at a young age. As people get older it is harder to change their opinions. So, teaching younger kids could help a lot more in the long run.”

Yet another student wrote: “I think it is crucial to educate students on the effects of climate change and how we can stop it. Not only is it a relevant topic to simply discuss, but it is up to our generation to further efforts to reverse global warming. If the general public is not educated on the matter of climate change, it will be harder to collectively enact change. The efforts of educating through news outlets is becoming less and less effective for youth in this day and age. The only way to directly target change is by implementing the issue of climate change into regular education. We implemented the necessity of teaching dating violence in school, it is parallel to the necessity of including matters of climate change so students can begin their conscious efforts to enact change. Adolescence is ones most influential stage of life, past this stage it becomes harder to alter opinions and ways of life. Therefore I believe it is crucial to include these matters into regular education. Everything I’ve learned in school has ultimately changed the way I live my life for the better.”

The proposed Climate Literacy Act presents an ideal opportunity for students to learn and apply civic engagement skills. This is a current issue that can offer engaged students with a real world education in the legislative process. Jeanine Silversmith, a former science and math teacher at the middle and high school level and now Executive Director of the Rhode Environmental Education Association (RIEEA), has been working with Senator Lawson and Representative Cortvriend to formulate H-5625 – http://webserver.rilegislature.gov/billtext21/housetext21/h5625.htm
and S464 – http://webserver.rilegislature.gov/billtext21/senatetext21/s0464.htm respectively. Testimony has been heard by the House Education Committee, and the bill is being held for further consideration. Rhode Island students, teachers, administrators and citizens can help by writing to committee members and local representatives to voice their support of the bill, express concerns and make suggestions for improvement. People living outside Rhode Island can contact their local representatives to suggest a similar bill be introduced in their own state.

To learn more, tune in to the “Story Walking Radio Hour” April 2021 episode on the Dreamvisions 7 Radio Network, every Monday at 9am and 9pm.

Wendy Fachon is a regular contributor to Natural Awakenings Magazine and Sustainable Living News and host of the Story Walking Radio Hour on the Dreamvisions 7 Radio Network. Visit dreamvisions7radio.com and search out her podcasts on sustainable living.