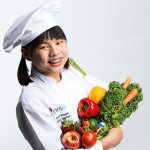 “The only thing that keeps you from getting success is yourself. If you don’t go after it, if you don’t take a step forward, you’re just taking two steps back because you’re really not doing anything.”
-Remmi Smith, 14, of Tulsa, who has published a cookbook and has a line of Italian salad dressing at some local supermarkets.

Cook Time with Remmi started out with my mom and I having some fun and filming me cooking in our kitchen. We put up a website and started airing the segments. Concerned about the childhood obesity epidemic we wanted kids to see that cooking is fun. Eventually a local cable channel started airing the cooking segments multiple times a week. This led to a second cooking series,”The Culinary Kid” and we partnered with Oklahoma State University Arts Program (OSUIT) to create a show where Remmi learned cooking methods that are similar to the ones the students at the OSUIT Culinary Program learn.

Things were pretty low key until 2012, I was named “Student Ambassador for Health and Wellness” for Sodexo Education. This led to my first contract, and in June I got my first paycheck! As the ambassador, I get to work with Sodexo’s 500 executive chefs giving them a kids perspective on nutrition. My recipes are served in all of Sodexo’s schools in North America. I am the face of their “Fresh Pick” Program and I have created 3 cooking series for them which airs daily in the cafeterias in front of 3.5 mmillion students! I am also the face of their cooking contest called “Future Chefs http://cooktimewithremmi.com

During her 14 years on Earth, Remmi Smith has achieved more than most people do in their entire lifetime. As the host of her own healthy cooking show, Cook Time with Remmi, she inspires children all over the country to live in wellness. Remmi’s Italian salad dressing is sold at Whole Foods Market and other specialty stores. She has also authored a cookbook, Global Cooking for Kids, which features healthy recipes from around the world. Remmi is the Student Ambassador for Sodexo, who serves her recipes in over 4,000 schools across the country. Remmi has partnered with national non-profit No Kid Hungry2 to help feed children in need.