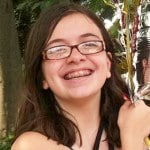 Julia Kubin is a 15 year old from Morristown, NJ and will be entering her junior year of high school in the fall. She is an honor student who enjoys singing. She has been taking Tae Kwon Do classes since 2009 and has reached the level of black belt. Julia recently received the Robert D. Henry ‘Sterling Character Award’ and is the National Ambassador for Heart Songs for Causes. An advocate for teens in crisis & an ally for LGBTQ people, Julia is working to end suicide, bullying & self-harm through the #PeytonHeartProject.

She first started her Sidewalk Smiles Campaign in March 2014 in Morristown, NJ. Julia wanted to better the community through random acts of kindness but it has become much more than that. Once a week she takes a colorful sign into town that reads “You Are Beautiful”. She stands there holding the sign for everyone passing by to see. Julia saw her message had a positive impact as soon as she started doing this.

People would walk up to her and ask what she was doing. Some honked as they drove past and give her a “thumbs up”. Other people would come up to her and say “You are beautiful, too.” Those three little words on Julia’s sign have made people smile, and conversations have taken place that never would have otherwise. “We are no longer just strangers on the street. Instead, we are connecting through a simple message,” says Julia

Before starting her campaign Julia was worried what people might think when they saw her out there holding signs. She wasn’t sure how they would react. She felt that there was enough negativity in the world and wondered what if a teen like herself could make it a little better by holding up a sign that says “You Are Beautiful.” Julia affirms, “I felt it was worth the initial shyness I might feel or the funny looks I might get.” She knew not everyone was going to acknowledge what she was doing when they walked past her. As long as a few people smiled when she was out there, then Julia felt it was worth having others walk by without acknowledgment. “I can’t impact everyone but that will not keep me from trying to impact the ones that are open to embracing my message,” says the 15 year old.

Julia’s message is a simple one. “I want you to know that no matter what people have tried to make you believe about yourself, you are a beautiful person,” says Julia. No matter how often you may have been told that you are not good enough, smart enough, pretty enough, or skinny enough; you are beautiful! Collectively, we make the world a better place. Julia adds, “There will always be people in our lives who want to make us feel like we are less than we are. I want you to know that your life matters and that you are beautiful.”