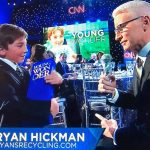 In 2012 at the age of 3, Ryan went along with his dad to the local recycling center and cashed in a few small bags of cans and bottles and decided that recycling was in his future. The day after going to the recycling center, Ryan notified his mom and dad that he wanted to give empty plastic bags to all the neighbors and maybe they would save their recyclables for him. Not only did the local neighbors save their cans and bottles for Ryan but so did their friends, families and co-workers. Today, Ryan has customers all over Orange County, CA and he has a passion to recycle that is amazing. His goal is to recycle to keep cans and bottles from reaching the ocean where it’s harmful to the environment. Ryan spends a part of every week sorting thru cans and bottles from his customers and getting them ready to take to the recycle center. http://ryansrecycling.com/

In 2016, Ryan’s recycling story went viral and he was featured on web sites and tv and radio stations around the planet. He’s a 2017 CNN Young Wonder, he’s appeared on the Ellen DeGeneres show and was interviewed by Maria Menunous on Sirius/XM Radio as well as Ryan Seacrest’s radio program and featured on the KFI AM 640 Bill Handel show  NBC, CNN, CNBC, PBS, FOX News, Amazon Prime’s SELF MADE series, Australia’s Channel 7 Sunrise morning show, Huffington Post, Voice of America, AJ+, UpWorthy, NOW THIS!, 60 Second Docs, AOL Finance, USA Today, Univision, Good Morning America, ABC World News and hundreds of ABC affiliate news stations around the world. (He even got a shout out from DELL, Adrian Grenier, Chelsea Clinton, George Takei,  Fabien Cousteau, GreenPeace, Congressman Darrell Issa and Oakland Raiders QB Derek Carr on Twitter).  Ryan has been recognized internationally for his recycling efforts and has received awards from The Daughters of the American Revolution, The County of Orange and The Pacific Marine Mammal Center as well as and the City Council of San Juan Capistrano. Ryan was awarded the “2017 Citizen of the Year” by his hometown of San Juan Capistrano.

Thank you to everyone who have sent Ryan encouraging emails and supporting his passion. Ryan is saving for his future college education (although he’s determined he’s saving for a full size trash truck) and he is a Youth Ambassador at the Pacific Marine Mammal Center in Laguna Beach. All proceeds from his company logo t-shirts go to help support their volunteer efforts. Ryan is also a brand ambassador for the recycling and sustainability efforts of Valet Living.

People ask all the time what kind of items that Ryan recycles. Ryan collects plastic and glass beverage bottles as well as aluminum cans. Ryan and his parents take them in by the truckload every few weeks to the local redemption center where they are unloaded, sorted and weighed. If you’d like to help Ryan and help the environment at the same time, contact him here to schedule a pick up.

Thank you to all of Ryan’s customers and friends and family who have supported his ambitions and hard work recycling since he started his business. Special thanks to Allison Jarrell at the Capistrano Dispatch and Scott Montgomery for letting us use your photos for Ryan’s site. http://ryansrecycling.com/