Artist: Stephen Halpern is a GRAMMY® nominated, award-winning composer, recording artist and producer whose healing music has helped millions worldwide to experience the blessings and benefits of deep relaxation and inner peace.

CHAKRA SUITE, his debut release in 1975 helped establish a quiet revolution and a new genre in contemporary instrumental music. To date it has sold over 700,000 copies. Halpern’s cumulative sales exceed 6 million units and his current releases continue to set the standard of excellence in the field.

Halpern’s most representative and best-selling recordings include PEACE OF MIND, MUSIC FOR SOUND HEALING, INNER PEACE, IN THE OM ZONE and the Billboard-charting DEJA-BLUES.

Before focusing on keyboards, in his earlier career, he was a dynamic jazz-rock trumpet player inspired by John Coltrane and Miles Davis, a guitar and bass player with old school R&B bands, and a long-time student of World music and shamanic sound

Steven Halpern is more than just a musician. He is a Renaissance man who is also an author, media spokesperson, seminar leader, pioneering sound healer and entrepreneur who helped create the alternative market for lifestyle-support music outside the traditional music industry. Steven has been recognized by Keyboard magazine as “one of the 30 most influential keyboard artists of the past 50 years.” 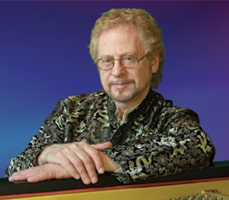 Steven’s music is an ideal complement for meditation, yoga, massage and other therapeutic bodywork, psychological counseling, and accelerated learning. Halpern’s music gets listeners “in the zone” and is used by leading business professionals, success coaches like Mark Victor Hansen and Brian Tracy, and entrepreneurs, students and teachers worldwide.

Steven has produced over 70 recordings in the Inner Peace Music® and SoundWave 2000™ subliminal audio series. He has influenced two generations of recording artists and music therapists, and has performed and recorded with a who’s who of well-known musicians including: Paul Horn, Paul McCandless, Babatunde Olatunji, Al DiMeola, Larry Coryell, Rick Derringer and Georgia Kelly.

After being initiated into what he has described as a ministry of healing music, Steven was encouraged to scientifically validate the extraordinary effects his music was having on listeners. This became the focus of his graduate studies, and his landmark research exploring the connections between sound, consciousness and healing were the first to employ the more subtle and sophisticated new technologies of brainwave biofeedback and Kirlian (aura) photography.

This research, and his first two books, Tuning the Human Instrument (1977) and Sound Health (Harper & Row, 1985) established him as the pre-eminent spokesperson for the emerging field of sound healing. He was the first in his field to appear on national television, including The Tomorrow Show with Tom Snyder. In 1991 he was profiled on CBS-TV’s 48 Hours.

Halpern’s work has been covered in The New York Times, the Los Angeles Times, and the San Francisco Chronicle, as well as by CBS, ABC, NBC and the BBC. Steven has written hundreds of articles, as well as a syndicated monthly column for over 20 years.

Since 1975, Steven Halpern, Ph.D. has been a popular speaker at leading holistic health and complimentary healing centers and conferences worldwide: He has presented workshops at Esalen, the Omega Institute, and Kripalu, and has spoken at the Sixth International Conference on Stress (Montreux), the National Music Therapy Association, the American Massage Therapy Association, The International Alliance for Accelerated Learning, The Whole Life Expo, and many others.

For interviews or PR please contact Diana Ziegler at 415-485-5321 or at dvz@innerpeacemusic.com 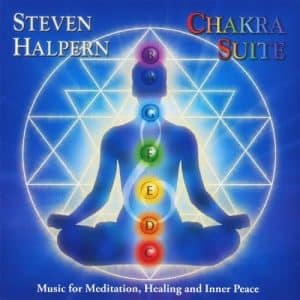 CHAKRA SUITE balances the chakras and assists optimal health and healing by stimulating each vital energy center with the corresponding sound frequencies. This is the composition that started the “Quiet Revolution in Musical Mindfulness over 40 years ago!

CHAKRA SUITE (previously released as Spectrum Suite) has sold over 700,000 albums worldwide and has been voted “The most influential New Age/healing album.”

This recording highlights the primordial power of pure tone, and an evolutionary/revolutionary approach to composing. The exquisite keyboard you hear is the legendary Rhodes electric piano, a healing instrument designed by Harold Rhodes. Its sound matched the sound I had been hearing inside my head during meditation and in dreams.

What you won’t hear are recognizable melodies, familiar chord progressions or a continuous rhythm, as is found in most music. Indeed, it was precisely because of the unique approach to tonal composition that you are able to respond in a more healing and intuitive, rather than intellectual manner.

Unlike most music, there is no conscious or subconscious destination; the music doesn’t have to go or do anything. Rather, it reminds us that we are human be-ings…not human do-ings. CHAKRA SUITE allows you to be in the moment…becoming one with the music…and with the stillness and peace that lies beyond sound.

Listen as background, and you’ll notice that you are breathing more slowly and deeply, and feeling lighter and more relaxed. Listen meditatively, especially with headphones, and you’ll become aware of the intricate interweavings of the overtones and the space between the tones. It produces an extraordinary psycho-acoustic effect that you can feel spiraling up your spine and moving inside your head.

Chakras Enter the MainstreamIn 1975, the concept and understanding of chakras had not yet entered the mainstream awareness. The original title of this recording was CHAKRA SUITE, but my business advisors counseled me to choose Spectrum Suite as the title because the music harnessed the healing potential of the sound and color frequencies of the electro-magnetic spectrum.

Since this album made its debut, it has traveled the world and reached millions of people from all walks of life, far beyond what I ever imagined. In the new millennium, it was time to re-christen this album with its original, and more appropriate and descriptive chakra music title, CHAKRA SUITE.

The State of the Art Keeps EvolvingEvery few years, a new generation of recording equipment becomes available. My recording engineer, Warren Dennis Kahn, and I were able to improve upon the exquisite beauty of the solo electric piano recorded with what was the state of the art analog or digital equipment at the time. To our delight, we “improved upon perfection.” The sound became even more luminous, more transparent, more heart opening, with a warmth and 3-dimensionality that took our breath away.

This edition showcases a new generation of instruments and exquisite ethereal textures that inspired me to explore additional dimensions of sound healing in combination with the classic solo version. I know you’ll appreciate and enjoy this multi-layered expansion to the timeless practice of chakra healing.