Veterans Advocate, Scott Freyer is the Awakened Soul Story of the Week! 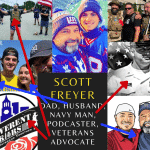 01-21-22 Veterans Advocate, Scott Freyer is the Awakened Soul Story of the Week!

Scott and I live in the same town, Griswold Connecticut we have both lived there for 9 years and for some reason, never officially met.  We would see each other at basketball games – and in passing at a local restaurant – but never were introduced.  I would see his posts on social media and on various town FB pages – I always admired the way he would handle himself on some pretty contentious comments made by others.  He seems to take the mediator side of things or with a comical comeback.  I also noticed that he was very involved in his children’s lives, his community and has a strong advocate interest in veteran’s organizations.  This is what piqued my interest in what he was really all about.  I wanted to know more about him and what drove him to help others.  We have chatted a few times about various things, local politics, helping people during the lockdown and about how we could do better to help others in the community.  So, I was very excited that he agreed to an interview for Awakened Soul Stories.  I had a great time taking to him during the interview and came away with a renewed admiration and respect for Scott and the kind of person that he is.

I hope you will listen to this episode and get to know Scott like I have.  He is a very AWAKENED human as you will hear, he does a lot to help the human race elevate the vibration so that one day – we can all, just get along and understand each other on a whole other level.  Peace and prosperity will prevail with people like Scott doing their part!

Scott Freyer was born in Red Bank, NJ in August of 1970 and grew up on the Jersey Shore. After graduating high school in 1988, he enlisted in the United States Navy and joined the submarine force. During his time in the service, Scott was stationed in Charleston, SC and Groton, CT. He deployed during Operation Desert Storm, Operation Deliberate Force, Operation Iraqi Freedom and Operation Enduring Freedom. In 2012, Scott retired from the Navy after 24 years as a Chief Petty Officer. Scott is currently employed by the US Navy as a Mechanical Engineer at Electric Boat.

In 2001, Scott met his wife Brenda on a blind date, and they were married in May of 2003. In December 2004, Brenda gave birth to their first child Dylan, who is currently an All-State soccer and lacrosse player at Cheshire Academy in Cheshire CT.

In January 2007, they had their second child, Olivia. Olivia is an Honor Student at Griswold High School and is on the volleyball and lacrosse teams.

Scott and his family reside in the town of Griswold Connecticut.

Scott is also the Co-founder of B3 Media with his friend Chris Nott, and they produce and co-host a weekly baseball podcast called “Bronx Baseball & Beer” and is currently the #1 baseball podcast in the state of Connecticut.

Scott is also heavily involved in the military community, specifically veterans and veterans suicide prevention advocate groups. He participates in several events every year including the Norwich Irreverent Warriors Silkies Hike and Tough Ruck Boston and has raised over $5000 for these charities.  He feels, as a veteran himself that we as a country, can do a better job with making veterans feel that we care and appreciate their service.  By raising awareness and fundraising, Scott is doing his part to make sure these Veterans are taken care of.