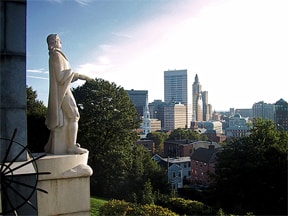 What is the definition of humanity? Does humanity merely refer to the human race? Is it merely the quality of being human? Or, is it the quality of being humane? Can one distinguish humanity as a collective of beings with presence of mind? And what does it mean for a human to be mindful, as opposed to mindless? What qualities define true humanity, and how is it achieved and sustained?

On the morning of July 28, 2010, I went walking along the Providence River toward College Hill. I was searching for Prospect Terrace Park and the statue commemorating Roger Williams, the Oxford educated minister who founded the colony of Rhode Island in 1636. His remains and those of his wife, Mary, are buried in a tomb beneath the statue.

Leaving the river behind me, I walked through Roger Williams National Memorial, a 4.5 acre urban greenspace located at the foot of College Hill, which marks the center of the settlement of Providence Plantations established by Williams. Crossing to the eastern edge of the park, I wondered which street to take up the hill, and noticed a car coming down South Court Street; it had a license plate with the letters UP followed by three digits. I took that path up the hill. Within five minutes, I was standing beside the 15-foot granite statue of Williams, facing west and taking in the view. I noticed the statue’s large right hand, extended in blessing over the city that sprawls out below. Across town, the statue of the Independent Man is clearly visible, standing atop the dome of the Rhode Island State House.

On a whim, I decide to walk one block down to look at the statue from below. As I stood on the lower street and looked UP, I was awestuck! The sun was positioned perfectly behind Williams’ head, creating radiating halo. The rectangular structure of the monument framed the enlightened figure squarely. It was 8:40 am, and the astrological timing was astounding. I shared the spectacle with a single witness, a woman walking by with her dog. 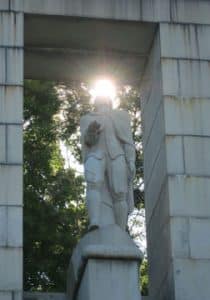 Photo taken one year later to try and capture the alignment

The coincidence of the halo challenged me to seek a deeper understanding of Williams’s life story. I already knew he had been banished from the Massachusetts Bay and Plymouth colonies for his liberal views of religion. He supported a separation between church and state and preached about the right to worship according to one’s own beliefs. Colony leaders on the other hand, felt religious freedom was a threat to civil order, and so Williams was prosecuted and exiled. Williams escaped south, wandering into the winter wilderness and the territory of the Narragansett native people, where he found refuge. The theologian befriended the natives, learned their language and studied their culture. He came to respect their way of living in harmony with nature and with one another and their expressions of reverent spirituality.

Thinking about all this, I walked slowly along the river and back to my car, parked by the state house, beneath the vigilant eye of the Independent Man. I drove away from the river, past the Providence Place Mall and through downtown Providence. I noticed the numbers on the bus coming at me in the opposite lane: Bus #33 on Route #333. I wondered if this was a relevant numerological event of mystical significance. According to the book Angel Numbers 101, threes indicate a connection with the benevolent ascended masters – spiritual teachers often associated with world religions. For example, Jesus with Christianity, Moses with Judaism, Buddha with Buddhists, Mohammad with Islam, and so on.

As the bus passed by, I noticed the vanity plate on the car that I was following – M O D E L. The word model suggested to me the proper example of moral behavior and true humanity. Throughout our history, great spiritual leaders set examples for all of us to live by. They taught the values of faith, peace, compassion, and joy through their living example. The appearance of the halo above Roger Williams suggested to me that he had taken his rightful place among the ascended masters.

Upon arriving home, I pulled a book off our library bookshelf, Roger Williams: His Contribution to the American Tradition, By Perry Miller, published in 1953. Looking to the index in the back of the book for the word model, I found pages referencing the Model of Church and Civil Power. This document, published in 1635, was a “concise summary of the position Massachusetts had arrived at in the philosophy of church and state, after having by the act of migration completed its revolution and stabilized itself on the basis on a Nonseparatist orthodoxy.” Williams argued for Separatism and against the document. At my daughter’s suggestion, I opened the book to page 33. The chapter heading at the top of the page was The Evolution of a Prophet. Below that was a Roman numeral III, indicating the third section of the chapter, and here was the secret to Williams’s Separatism – typology. “Typology is a peculiar method of interpreting the Bible, specifically the relation of the Old Testament to the New, in a way that finds inner, mystical correspondences which make unnecessary and actually irrelevant any concern for the literal, historical facts of Israel’s career.” The mysterious studies of Astrology, Numerology and Typology merged together in this moment.

Williams actually refuted the first four of the Ten Commandments in the Old Testament, which limited the individual’s self-authority. He defined a Christian quite simply as a person who follows the teachings of the word of God through their conscience and treats others in the ways Jesus would treat them. He criticized the mass conversions of native Americans to Christianity, and he created a colony where people could live according each according to one’s own conscience and free from religious persecution. He further advocated that there could be no peace on earth until all men granted each other religious freedom. A true follower of Jesus Christ, Williams was an independent thinker.

Ian Williams Goddard, eighth-great-grandson of Roger Williams, wrote about his ancestor’s legacy, “A refuge from rampant religious persecution, Rhode Island became home to the first Jewish synagogue in America and a sanctuary for Quakers who were being killed and persecuted in Massachusetts and other colonies. Rhode Island was an open door to all people; a safe harbor in a vast sea of tyranny and oppression; a safe harbor with a bright beacon shining forth the light of liberty, a bright beacon that was Roger Williams.” Goddard also wrote that the most heretical among Roger’s many “dangerous opinions” was challenging the King of England’s claim to the American lands and claiming that the rightful owners of the land were the native Americans. In their hunger for land, European settlers ignored Williams’s appeal to the sanctity of property and individual conscience, and ignored the native’s rights, not only to property, but also to life, liberty and the pursuit of happiness. The European takeover of American lands was similar to the European Christian Crusades undertaken to kill non-Christians and dominate the “holy” lands in the Middle East. Neither was done in the true spirit of Christianity.

From the colonial period and well into the industrial revolution, the reading of the Bible was part of a standard education. As government gradually took more and more control of education, Bible stories and the mere mention of Jesus has become banned from public schools. These subjects are deemed too religious. So how can we teach humanity? Now that public education has dismissed the life example of Jesus, perhaps it can adopt the example of a more contemporary and American model – Roger Williams. Why not introduce the story and independent thinking of Roger Williams into schools nationwide to teach humanity, mindfulness and critical thinking?

Grades 1-3: Finding Providence: The Story of Roger Williams by Avi 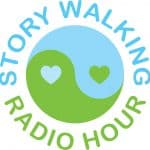 Learn more about Wendy and Listen to her Radio Show