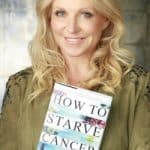 Jane McLelland should only have lived about 12 weeks, according to cancer statistics and doctors, after receiving her diagnosis of Stage IV cancer nearly 20 years ago. But today, after suffering from cervical cancer, secondary lung cancer, and treatment-related myelodysplasia, she is alive, well, and cancer-free.

She learned that in 1931, Otto Warburg won the Nobel Prize for discovering that cancer cells have an altered metabolism – they ferment glucose to produce energy. Since then, more research has expanded on his initial studies, and has revealed that cancer cells require a tremendous amount of not only glucose, but also glutamine (and other amino acids), as well as lipids. Based on this concept, McLelland developed her own cancer-starving cocktail utilizing diet, supplements, and off-label drugs that proved to be more effective than any current cancer treatment. These were low toxicity and included drugs such as metformin and a statin. The key was to block the fuel lines to the cancer cell without starving herself.

Mainstream medicine primarily uses chemotherapy and radiation as the two key treatments to target the tumor’s abnormal fast-dividing cells but given that chemotherapy has poor outcomes for stage IV (classified as terminal) cancer, McLelland decided she had to attack her cancer from two fronts: starve and weaken the cancer’s stem cells, and then kill them while they were down.

McLelland says chemotherapy leaves behind cancer stem cells that can quickly adapt and mutate to spawn a new tumor and that you want to eradicate both types of tumor cells at the same time. She says most people are unaware that tumors contain these metabolically flexible cancer stem cells and that chemo and radiotherapy can’t cure you if you don’t eradicate both.

McLelland says people don’t truly understand cancer and that patients are thrust into a world in which they are helpless and must rely completely on their oncologist. It’s difficult for them to advocate for themselves because they don’t even really understand how cancer works as the clock ticks against them. McLelland teaches patients how cancer feeds so they can stop the relentless growth by combining traditional treatments with agents that block the cancer metabolism. Without constant food supplies, cancer cells wither away and die. This approach increases the effectiveness of conventional therapies and, because it eradicates the stem cell, helps stop the treatments becoming resistant – the reason most ultimately fail.

She did not want to write a book because she did not want to relive such a traumatic experience, but she felt a social responsibility to share this critical information people weren’t getting elsewhere. Since she approached cancer with a different perspective, she created a unique and simple ‘Metro Map’ triangle illustrating the key metabolic pathways that must be blocked.

So now there is How to Starve Cancer Without Starving Yourself (4.6 stars; 2,525 ratings), How to Starve Cancer… and Then Kill It with Ferroptosis (4.9 stars; 36 ratings), her online course (which Dr. Etienne Callebout, MD hails “a labour of service to mankind”) charting the landscape of cancer metabolism in a new way that everyone can understand and her private Jane McLelland Off Label Drugs for Cancer Facebook group has 49.5K members and growing.

McLelland’s method can be done in tandem with mainstream medicine such as chemotherapy and radiation, so cancer patients don’t have to choose one versus the other. McLelland works with oncologists all over the world, as listed on her website, who follow the principles of her approach with many remarkable recoveries and testimonials from happy doctors and patients

Bio: Jane McLelland is Winner of the Lifetime Achievement Award 2019 ‘Amazing Women Global’ for unsung heroines, for her work educating and helping cancer patients since 2003. She is trained as a Chartered Physiotherapist, gaining a distinction in her exams and winning the Sarah Leeson Memorial Award for the most promising student. After qualifying she worked in the NHS and private practice for 12 years specialising in Neurology and then Orthopaedics when she left the profession to pursue more entrepreneurial endeavours. In 2002 she launched a range of toiletries and a uniquely-designed waterproof book under the brand name BATHrobics and the following year she won the coveted UK Gift of the Year Award. Throughout this time (from 1994 until 2004), Jane battled two aggressive cancers with metastatic spread, both were classed as ‘terminal’. Using her medical knowledge and researching heavily, she put together a cancer-starving formula, using natural therapies, exercise and diet. When she developed a second cancer, myelodyspasia, the result of chemotherapy and radiotherapy for her first cancer, she knew she only had weeks to live. With nothing to lose, she put together a unique cocktail of old drugs. To her enormous relief, joy and surprise, her cancer just ‘melted away’. Her cocktail was more powerful than she had ever hoped.