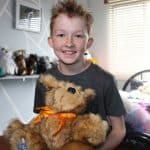 When Campbell Remess was 9 years old, he asked his parents if he could buy Christmas presents for the children in his local hospital. His mother told him that it would cost too much. But Campbell, one of nine children whose family lives on the Australian island of Tasmania, was undeterred. He took matters into his own hands — literally.

He founded Project 365 by Campbell, and using his mother’s sewing machine, started crafting one-of-a-kind teddy bears to give to sick children in the hospital and around the world. Now 13 years old, Campbell has made between 1,200 and 1,400 bears by hand. This year, he began auctioning some of his bears and using the proceeds to send children and their families on “Kindness Cruises,” a much-needed escape from their battles with cancer. Campbell is also working on organizing a fundraiser dinner in Hobart for cancer research.

“I think the magic in the bears is the hope,” he said. “It’s the hope that the bears give the people.” 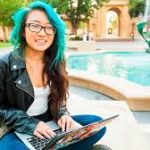 Most 19-year-olds don’t know how to code or build robots, let alone teach others. But that’s exactly what Christina Li is determined to do through Hello World, her annual computer science camp for middle school girls. Christina started her free, weeklong classes as a high school junior in Macomb, Michigan. Today, each camp hosts about 30 girls, in the hopes of bridging the gender gap that exists in STEM fields (science, technology, engineering and math).

Now in her sophomore year at Stanford University, where she is studying computer science and mechanical engineering, Christina will be interning this summer at SpaceX, a company that strives to enable people to live on other planets.

“It’s not that I want (the girls) to exactly follow in my footsteps,” Christina said. “I really hope to show them that … their ability is unlimited.”

Christina Li is a sophomore studying computer science/electrical engineering and mechanical engineering at Stanford University. Currently at Stanford, she’s working on the Mars Rover robotics team as the mechanical co-lead. Christina created Hello World four years ago to teach young girls how to code websites, robots, apps, and games, to help them say “hello” to the world of computer science.
http://tina98.github.io/HelloWorld/