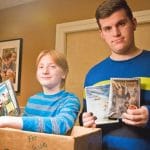 Most 13 year olds like to take a break from friends and school to watch movies and play video games but when Torrin Thorp was required to spend a lot of time in the hospital for Asthma, that became the only thing he could do for a while. Thorp began to look forward to and rely on the entertainment there to get through some painful, challenging procedures.  His brother Robbie Thorp also went through surgery around the same time and had a similar experience. Being at the hospital so often they would both quickly reach the bottom of the movie and video game options and wished for more of a selection. Thorp wanted to take action to change this and encourage the friends he made that were still in the hospital too.  In 2015, Thorp started the “The Helping Hand.”He has collected and donated almost 2,000 DVD’s and Movies, donated over 650 movies, TV’s and DVD players to Crossroads RI. is now expanding his outreach to “Blessing Bags” for the homeless and their dogs.

Torrin is a 1,000 grant recipient from Daisy Button Believes

Robbie (19) was RI’s Prudential Spirit of Community Bronze Medal winner this year.  He is also the New England Epilepsy Ambassador, having traveled to DC twice to participate in the Teens Speak Up/Speak Out conference.  He is mentor for teens with chronic illnesses and co-chairs the RI Walk for Epilepsy.
http://www.valleybreeze.com/2015-12-09/cumberland-lincoln-area/thorp-brothers-give-back#.WBzo94WcFMs. 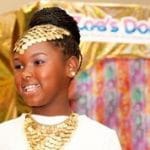 At age 5, Zoe Terry  created her own organization called Zoe’s Dolls to inspire and motivate girls of color to love themselves. She promotes positive body image by holding her “Love the Skin I’m In” Creative Expressions Contest, where she encourages girls to submit a poem or video on why they love themselves. Since launching Zoe’s Dolls, she has donated more than 2,000 dolls of color to girls in need.

When Zoe was younger, her mom would teach her the spirit of giving by asking her to give away one of her toys at Christmas time.  Right before Zoe’s  6th birthday, she told her mom that she didn’t want to give a toy away at Christmas anymore.  Zoe exclaimed that instead of giving a toy away at Christmas, she wanted to do something totally different.   Zoe said that for her birthday she wanted to give little brown dolls to little brown girls who did not have dolls to play and that was all she wanted for her birthday!   This was the start of Zoe’s Dolls!

Zoe is a 1,000 grant recipient from Daisy Button Believes