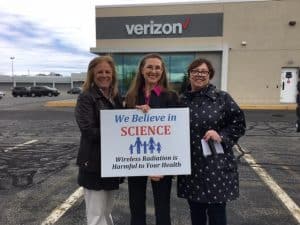 Wireless devices began to proliferate with the introduction of the Apple iphone in 2007, and it has revolutionized the manner in which we communicate. Since then, many people have become highly dependent on cell phones and other wireless devices, yet are unaware of the health risks associated with the fine print buried within the lengthy device manuals.

As wireless technology advances forward, the telecommunications industry will expend billions to build a new infrastructure for 5G, the next generation of technology expected to support the internet of things (IoT). There is a major question, however, that the industry has failed to answer adequately: How safe is 5G? Will the costs and risks be worth the benefits? The three main benefits of 5G are faster speeds, faster response times between machines and the ability to support a huge number of simultaneous connections. Verizon’s millimeter-based wavelength 5G will operate at frequencies of 28 GHz to 39 GHz. This is over ten times higher than the 4G network, which operates at 700 MHz to 2500 MHz to transfer information. For comparison sake, the natural frequency of the standing human body is 7.5 Hz. And the fact is, some people are more highly sensitive to the higher frequencies of 4G than others, and they report suffering from adverse health issues related to wireless frequency exposure. How will even higher frequencies be likely to effect life as we know it?

In an article titled Wireless Silent Spring, Cindy Russell, MD, references the widely-read book Silent Spring, written by marine biologist Rachael Carson and published over 50 years ago. Carson’s research brought world attention to the devastating effects of DDT and other pesticides on wildlife species and on humans. Despite Carson’s efforts, toxic pesticides persists today. In fact, even more agricultural chemicals have been created, leaving a greater toxic legacy. Biologists, conservationists and farmers are unsettled by the resultant and growing decline and loss of vital pollinator species populations. Other scientists, medical practitioners and citizens are concerned about the effects of pesticide chemicals as they travel up the food chain.

Dr. Russell’s article leads readers into new territory, by highlighting many the similarities between pesticides and wireless technology. As municipalities consider a more  widespread installation of cell towers, Russell shares the science of wireless technology effects on wildlife, and she compares the histories, mechanisms and impacts between pesticide use and wireless radiation. A diverse array of animal life relies upon the geomagnetic field for migration, breeding and feeding. Man-made electromagnetic frequencies interfere with these abilities and threaten species survival. The non ionizing radiation of wireless is also known to disrupt complex cellular and biologic processes in mammals, birds, fish, amphibians, insects, plants and trees. While toxic pesticides threaten nature, the additive effect of wireless electromagnetic frequencies increases the threat.

Another environmental disadvantage of 5G is energy use. A typical 5G base station is likely to consume up to twice the electric energy compared to a 4G base station. Beyond that, energy costs can grow even more at higher frequencies, due to a need for more antennas and a denser layer of small cells. The 5G infrastructure is designed to bring closer proximity of antennas to home, workplace and school settings, which raises more questions about the effect on human health and development.

Clearly, more safety research needs to be done before spending money to build an infrastructure that may fail to benefit humanity. The Massachusetts for Safe Technology website offers an extensive list of resources, developed  by scientists, physicians, academics and advocates, who maintain terrific websites providing the facts people need to understand the wireless radiation issue and safe technology solutions. For now, wired technology is the safest bet. To learn more, listen to the August episode of the Story Walking Radio Hour with host Wendy Nadherny Fachon and guest Cecelia Doucette, Director of Massachusetts for Safe Technology and Education Services Director with the international non-profit Wireless Education.

Wendy Fachon is a regular contributor to Natural Awakenings Magazine and Sustainable Living News and host of the Story Walking Radio Hour on the syndicated Dreamvisions 7 Radio Network. Visit dreamvisions7radio.com and search out her podcasts on sustainable living.