Celebrating a dynamic 37 years of marriage marked by passion, entrepreneurial courage and magical musical collaborations, Donnelly and Feller – collectively chosen by Music Connection magazine as one of their Hot 100 Live Unsigned Artists for 2014 -are interested in much more than simply beautifying the world with their soulful and romantic baritone/soprano power.

Through their mufti-faceted company Jeremiah Productions, the duo – acclaimed opera singers who also perform jazz, musical theater and gospel – have dedicated their lives and careers to transforming both minds and voices through concerts, workshops, private training, classes and online media.

Since the release of their critically-acclaimed debut album That’s Amore a few years ago, they have performed various times in Europe, making a return visit to Italy, headlining shows in France and last year regaling Ireland for the first time. When they recorded their new album My Heart Is For You, they knew exactly where to look for pieces that would perfectly complement the heartfelt title track they penned with their adult son Jeremiah. They chose popular and well known operatic and classical pieces that they heard during their European travels. 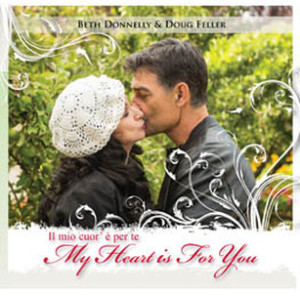 MY HEART IS FOR YOU began in my heart…just a feeling… and found its way onto the keys of our piano.  As I played a few different chord progressions, the words and music began to emerge.  A romantic melody begged for the words of this little Italian phrase….that I repeated over and over in my mind.. ..Il mio cuor’ è per te.   I stopped and thought…I really need to write this down.  Soon a musical idea expanded into variations.  It was definitely a duet of subtleties.

My husband Doug then joined me at the piano putting the composition down on manuscript, embellishing  the accompaniment as we worked together to finish it.  The lyrics that inspired the chorus were absolutely spot on.   The verses needed some work.  Time to get our son Jeremy’s input .  He has always been a poetic writer, and he worked with me to come up with the text for the two verses.  When the three of us were in agreement with our final composition, we went to an arranger to prepare the manuscript for the instrumentalists. Recording sessions began, additional orchestration was added, and the rest is history.  Even though the song tells the story of two lost lovers, it contains the  heart of many…composers, arrangers, musicians and technicians.  The song started as nothing more than a melody inspired by a little Italian phrase.   But,  the dedication, and artistry of many breathed life into this simple song.
http://www.jeremiahproductions.com/