Artist Debara Bruhn Towt Bio: Debara, was born and raised around music and many of her earliest memories are colored by her fiddle playing and foot stompin’ and piano. Playing, honky-tonk singing family. Even, today they enjoy gathering as they sing & play together. Her love of Jazz and her late brother William Fredrick Bruhn, who played jazz piano, will always live in her heart. Music was and is a way of life. It is obvious that music is in her soul and that she loves everything about it. Debara, began singing at age two and performing by the age of four. She truly feels that there are song’s in her soul. Crystal Butterfly’s fly in the Sumer of Your Dreams are the song’s that she wrote as a memorial tribute for her daughters, Emily Crystal who passed away at the age 10 being in a coma for 8 years of her life due to heart birth defects and Sumer who was killed in a car accident at the age of 16. 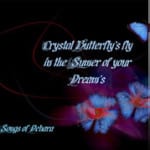 CD: Crystal Butterfly’s fly in the Sumer of your Dreams. It is with much gratitude and with a heart full of thanks that go out to our producer’s, Mr. Howard Gale & Mr. Mark Evans at Silent Partner Productions in Los Angeles. Mark received a ” Pearl Award” for his music on the movie “Other Side of Heaven”. Debara also enjoyed collaborating with Mr. Kurt Wilson on her Songs.

CD: “A’ nidawehi.” which in Cherokee means “Angels”. The song Shadow Hawk is a theme song for the Movie Shadow Hawk on Sacred Ground which was filmed in Southern Utah in 2003. The other Songs are music which, Debara co-wrote. Debara enjoys singing live on stage for the play, legends of the Chiefs with Mr Black Hawk Walther & Mason Walther/ writers of the tribute to the Chiefs. The Songs on the C.D A’nidawehi, are a Tribute to the spirit and legends of great chiefs and hero’s in American for over a hundred years. www.callinallangels.com

Debara Bruhn Towt ‘s Video dedicated to Sumer, our daughter “Remember Me,” is on the NME Awards in the United Kingdom. Thank you so much for your support & love & friendship through out my life’s journey.. Wow… Would love to hear from you and what you thoughts are.. Here it is … When you watch it all the way thru.. You can vote in the write hand conner where it says favorites.