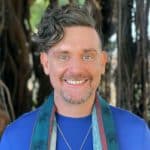 Brandon Beachum is a podcaster and entrepreneur whose The Positive Head Podcast has recently been joined by a variety show called Optimystic that is recorded before a live audience. He has lately released his first book, called The Golden Key: Modern Alchemy to Unlock Infinite Abundance, which is so good that we managed to discuss just the first four keys when he joined us in previously.

Today we discuss the second four keys, including Brandon’s Golden Key. Brandon Beachum is a lot of fun! You can visit goldenkey.gift to enjoy a free gift, play a game, and get to better know this charismatic guest and his empowering message.