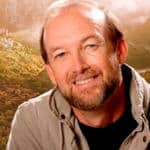 James Redfield was 43 when he published The Celestine Prophecy. He has been keenly interested in human spirituality all of his life. Born on March 19, 1950, he grew up in a rural area near Birmingham, Alabama. From an early age, he was motivated by a need for clarity about spiritual matters. Brought up in a Methodist Church that was loving and community-oriented, he was nevertheless frustrated by a lack of answers to his questions about the true nature of spiritual experience.

As a young man, he studied Eastern philosophies, including Taoism and Zen, while majoring in sociology at Auburn University.

He later received a Master’s degree in counseling and spent more than 15 years as a therapist to abused adolescents. During this time, he was drawn into the human potential movement and turned to it for theories about intuitions and psychic phenomena that would help his troubled clients. All along, Redfield was forming ideas that would eventually find their way into The Celestine Prophecy. In 1989, he quit his job as a therapist to write full-time, synthesizing his interest in interactive psychology, Eastern and Western philosophies, science, futurism, ecology, and history.

Using an adventure parable approach that has been called “part Indiana Jones, part Scott Peck,” The Celestine Prophecy created a model for spiritual perception and actualization that resonated with millions of people and focused on the mysterious coincidences that occur in each of our lives. Disdaining the spotlight himself, Redfield proclaimed in The Celestine Prophecy that each of us must intuit his own spiritual destiny.

As he writes in The Celestine Vision, his non-fiction title published in 1997, “The actual writing of The Celestine Prophecy occurred from January 1989 through April 1991 and was characterized by a sort of trial-and-error process. Quite amazingly, as I remembered earlier experiences and wrote about them, lacing them into an adventure tale, striking coincidences would occur to emphasize the particular points I wanted to make. Books would show up mysteriously, or I would have timely encounters with the exact sort of individuals I was attempting to describe. Sometimes strangers would open up to me for no apparent reason and tell me about their spiritual experiences.”

After the self-published book was brought to the attention of Warner Books through a perceptive sales rep, Warner Books bought the rights and published the hard cover edition in March 1994. The book quickly climbed to the #1 position on the New York Times bestsellers list. It remained on that list for more than three years, joined by The Tenth Insight, which built upon the Nine Insights revealed in the first novel. The two books spent a combined 74 weeks on the New York Times list, making James Redfield the best-selling hard cover author in the world in 1996, as cited in BP Report (January 1997).

In October 1997, James Redfield was awarded the highly prestigious Medal of the Presidency of the Italian Senate at the XXIII Pio Manzu International Conference in Rimini, Italy. Pio Manzu is a nongovernmental arm of the United Nations headed up by Mikhail Gorbachev.

The Celestine series of adventure parables continued in 1999 with the publication of The Secret of Shambhala: In Search of the Eleventh Insight (Warner Books). Set in modern day Tibet, Redfield continued the inspiring journey of The Celestine Prophecy and The Tenth Insight—carrying readers to a new adventure in a sacred place where truths that can affect all of humanity await. In 2002, James joined author Michael Murphy and filmmaker Sylvia Timbers in a collaborative work entitled God and the Evolving Universe (J.P. Tarcher).

In March 2004, James Redfield was honored by the Wisdom Media Group with the World View Award for engaging the discussion on the nature of human existence and for his ongoing efforts and contributions to the bettering of humanity.

The fourth and final book in the Celestine series, The Twelfth Insight: The Hour of Decision, was published by Grand Central Publishing (formerly Warner books) in February, 2011.

James is embarking on the Celestine Prophecy Tour… take a look and see if he will be in a city near you TheCelestineProphecyTour.com     www.PortalToAscension.org
https://www.celestinevision.com/