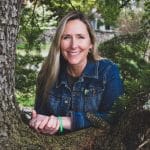 Scarlett Lewis founded Choose Love Movement after her son, Jesse, was murdered during the Sandy Hook Elementary School tragedy in December 2012. It is one of the worst mass shootings in U.S. history.

At six years old, Jesse, alongside 19 of his first-grade classmates and six educators, died. Yet law enforcement says Jesse used his final moments to heroically save nine of his friends.

Shortly after his death, Scarlett decided to be part of the solution to the issues that we’re seeing in our society today—and that also caused the tragedy. She created the Choose Love Movement and became an advocate for character development and social and emotional learning (SEL), which teaches children how to manage their emotions, feel connected, and have healthy relationships.

Before his death, Jesse left a message on their kitchen chalkboard, “Norturting Helinn Love” (Nurturing, Healing Love). When Scarlett learned that these words are included in the definition of “compassion” across all cultures, she realized that love, connection, and belonging are universal wants and needs that connect all of humanity. https://chooselovemovement.org/

With the guidance of Christopher Kukk, PhD, Dean of the Cormier Honors College for Citizen Scholars and Professor of Political Science at Longwood University, a Fulbright Scholar and author of “The Compassionate Achiever,” these three words led to the creation of a formula that can be used by anyone, at any time, anywhere in the world to manage their response to any situation.

These four character values are easy to learn. When practiced, they strengthen the health and resilience of individuals, improve the community and culture of groups and promote a safer, more peaceful and loving world.

The Choose Love Formula™ is the foundation of our next-generation Social & Emotional Learning and Character Education programming that was originally created for schools, but has quickly spread into homes, communities and the workplace to strengthen connection and promote a more peaceful, loving world.

Scarlett Lewis is the mother of Jesse Lewis who was killed in his first grade classroom during the tragedy at Sandy Hook Elementary School on December 14, 2012 along with 19 classmates and 6 teachers and administrators in one of the worst school shootings in US history. She founded of The Jesse Lewis Choose Love Foundation in honor of Jesse and to spread a message he left on their kitchen chalkboard shortly before he died, Nurturing Healing Love, the formula for choosing love, and to promote social and emotional education in schools as well as a consistent message of compassion in our communities.

Scarlett is the recipient of the International Forgiveness Award, the Live Your Legacy Award and the Common Ground Award for her advocacy work for peace and forgiveness. When she became a parent for the first time, Scarlett wrote and published a children’s book, Rose’s Foal. Following Jesse’s death, Scarlett wrote, “Nurturing Healing Love”, a story about her journey of turning personal tragedy into something that can positively impact the world. An artist and avid horsewoman, Scarlett lives on a small horse farm in Connecticut with her son and animals.