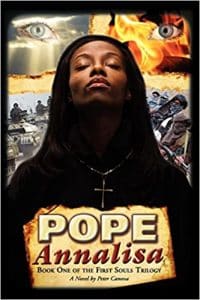 THE FIRST SOULS TRILOGY, WINNER OF BEST BOOK SERIES, THE INDIE BOOK AWARDS— Sister Annalisa Basanjo heals the lame and the blind. She foretells events. She may even bring the dead back to life. Annalisa rises against a background of murder, betrayal, and assassination to become the pope and the world plunges into war, the Church teeters on ruin, and terrorism runs rampant as she introduces her new way. Is Annalisa a savior or the long-predicted false prophet who will cause the downfall of the Church and lead the world order to ruin? Four special people are destined to answer this question, for the female pope indeed carries a secret within her that will transform the world-one way or the other.