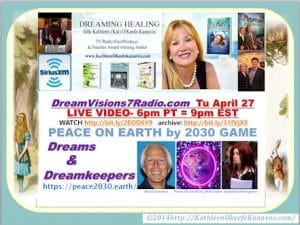 What if peace on earth was actually possible? The planet’s wisdom keepers tell us that when ½ of 1% of humanity wholeheartedly believe peace on earth is possible (40 million people), there will be enough coherence of thought and emotion to shift our collective consciousness to make this a reality. With each DreamKeeper activating 2 new DreamKeepers a year, and every POE Zone activating 2 new POE Zones a year we will reach 40 million DreamKeepers and a POE Zone in every city and town in the world by 2030. David Gershon and Suzanne De Gregorio are here to tell us all about Peace On Earth by 2030 Game. “We are building a movement of DreamKeepers—those who believe peace on earth is possible and are committed to making it a reality —empowered with the seven actions that enabled the First Earth Run to unite the world and create peace on earth over its 86-day journey. These actions are designed as a global game that will take place between 2020 and 2030.”

In 1986 at the height of the cold war a torch of peace was passed around the world. The First Earth Run, in partnership with the United Nations Children’s Fund directly engaged twenty-five million people and 45 heads-of-state in 62 countries.

The initiative, entitled the First Earth Run, came to be seen as one of the great success stories about what can be accomplished in our world with the power of imagination and the commitment of dedicated individuals. The unique conditions that allowed it to succeed then are once again present now.

We are once again facing a similar fear and contraction in the world, which is again creating a comparable pressure toward expansion and transformation. I hope that this story will prove instructive, inspiring the imagination and will of many around the world to enter into this opening. To enable this it concludes with “7 Actions to Change the World.”

David Gershon is the author of ten books, including the best-selling Empowerment: The Art of Creating Your Life As You Want It and Low Carbon Diet: A 30-Day Program to Lose 5,000 Pounds, winner of the “Most Likely to Save the Planet” Independent Publisher Book Award

Suzanne De Gregorio graduated from the University of Kentucky with a political science degree, concentrating in International Relations. Over the past twenty-five years she has advocated for disability access, the environment, civil liberties, health and wellness, and peace causes. Suzanne and other Kentucky special needs parents were instrumental in getting a form of medical cannabis legalized through the Kentucky state legislature. She contributed to the Nautilus Silver Award winning book, “Dreams That Can Save Your Life: Early Warning Signs of Cancer and Other Diseases”. Suzanne manages a food pantry and coordinates volunteers for a community ministry in Louisville, Kentucky.

Have a Question for the Show? Go to
Facebook– Dreams that Can Save Your Life
Facebook Professional–Kathleen O’Keefe-Kanavos
http://kathleenokeefekanavos.com/