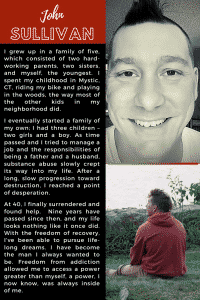 We will discuss his remarkable journey through addiction and recovery. What his life is like now and how grateful he is to have had a 2nd chance.

John grew up in a family of five, which consisted of two hard-working parents, two sisters, and the youngest, John.   John spent his childhood in Mystic, CT, riding his bike and playing in the woods, the way most of the other kids in the neighborhood did.

He eventually started a family of his own; He and his wife had three children – two girls and a boy. As time passed and John tried to manage a job and the responsibilities of being a father and a husband, substance abuse slowly crept its way into his life. After a long, slow progression toward destruction, John finally reached a point of desperation.

At 40, John finally surrendered and found help.  Nine years have passed since then, and his life looks nothing like it once did. With the freedom of recovery, John has been able to pursue life-long dreams and became the man he always wanted to be.  Freedom from addiction has allowed John access to a power greater than himself, a power he now understands was always there….inside of him.