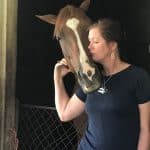 Hope is the magic elixir that can transform life’s troubles into a sense of grace and meaning. Experience modern-day miracles as 30 inspiring individuals share their high-fives and down-lows of moving through physical challenges, abusive relationships, addictions, lost and found love, and more.

The Miracle of Finding Your Voice

Laura Rowley has had an intensely close connection to animals since her earliest days growing up in rural Western New York. Even then, Laura was highly attuned to the feelings—and even thoughts—of animals, although she attributed the communications she sensed to an active imagination. Laura always realized that horses were meant to play a profound role in her life. At age 12, she got her first horse—and she’s had at least one ever since. Over the last four decades, Laura has become a well-rounded horsewoman. She has competed in low-level eventing, dressage, and Hunter/Jumpers. She managed a 60-stall facility in the Genesee Valley of New York, where she participated in and organized clinics, shows, and a sales horse program. She co-owned and sponsored upper-level Jumpers and an Intermediate Event horse. She moved to Florida horse country and established a school for equestrian vocational training for Central Florida Community College while breeding thoroughbreds at her Ocala farm. It was with her horses in the 1990s when Laura first clearly heard an animal’s thoughts. While filling the water buckets at her barn, she heard, “Hey—I’m thirsty too!” In disbelief, Laura checked each stall and realized she had missed one horse’s bucket. She filed this incident away with others from childhood until a trip to Scotland revealed what she was no longer able to ignore. While on a mystical retreat on the isle of Iona, Laura instinctively laid her hands on an injured women’s leg and “saw” the injury as well as understood that it could be healed with energy. This powerful incident, combined with a lifetime of intuitive awareness, prompted Laura to open her self to the possibility that her unique gift was to be developed. With a quiet mind, she gave herself permission to believe, and began to receive clear information regarding what a particular animal was feeling, experiencing, and desperately trying to communicate. Word of mouth led increasing numbers of clients to Laura  – all were astonished at her ability to sense health issues that were later confirmed by veterinarians. Although Laura’s work is intuitive, it is grounded in the principles of many of history’s great thinkers. Laura believes that her classical education at the State University of New York at Geneseo, allowed her to refine her gift and ultimately create her respected international practice. Laura’s now highly developed and refined, “medical intuition,” animal communication and intuitive healing allow her to serve trainers, veterinarians, pet owners, and competitors from amateur to world-class levels. Her practice has grown today to embrace the behavioral, medical, and emotional well being of animals and their people. Laura serves an international clientele through both phone consultations and hands-on teaching workshops. Her belief that we are all interconnected fires her passion for supporting greater love, compassion, and communication between the human and animal kingdoms.

Laura has her own Radio Show on the Dreamvisions 7 Radio Network: Animal Connections with Laura Rowley heard every Friday at 9am& 9pmET