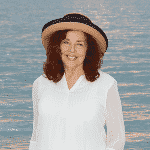 Angela Passidomo Trafford is a nationally, even internationally, known healer, spiritual teacher, workshop leader, and writer. The author of “The Heroic Path: One Woman’s Journey from Cancer to Self-Healing” and “Remembering the Language of God: The Forgotten Path”, Angela has been featured on several national television and radio programs and in various national magazines.

One Woman’s Journey from Cancer to Self-Healing, How to Heal Yourself of Life-Threatening Illness, Find Your True Self, and make Life work

Some years ago, Angela was afflicted with what she now calls “the gift of cancer”. Led in prayer to Dr. Bernie Siegel’s book “Love, Medicine & Miracles”, she incorporated into her meditation practice the visualization techniques offered there; and experienced a powerful healing. That inspiring story is recounted in Dr. Siegel’s subsequent book, “Peace, Love & Healing”.

Angela Passidomo had four separate bouts with breast cancer. Facing her own mortality, she embraced principles of love, hope and healing, using meditation and visualization to get to the root of her illness. It was during one of these meditations that she felt a white light moving through her body, healing her. Through her own experience Angela has developed the gift of helping people transform their health and way of living, find their true selves, and make life work. This book is the story of how she healed her body and her life, and a guide to the philosophy and technique of her self-healing process to help you on your own path to healing and happiness. https://www.passidomo.love/

Angela Passidomo Trafford believes she cured herself of a life-threatening illness by getting to what she considers to be its emotional cause. Diagnosed with a six-centimeter malignant breast tumor at the age of thirty-five, Angela was told she needed a radical mastectomy as well as radiation and chemotherapy. After some soul-searching, she opted for a lumpectomy. A year and a half later, the cancer recurred in her other breast. At this point, she decided to heal herself.

‘I regarded that lump as a symbol of the sad life I had been living,’ recalls Angela. ‘I’d been in an abusive marriage. We’d lived in the isolated woods of Canada, where I had no support system. And all the pain, resentment, and sorrow of my life had collected in that area near my heart until, finally, the blocked-up energy of my emotions manifested itself as a tumor. Cutting out the tumor was cutting out my old life.’

Amazingly, Angela triumphed over her cancer. She credits not only the medical treatment she received but her journal writing, meditation, and visualization. ‘I would imagine a group of small birds eating golden crumbs,’ she recalls. ‘The birds represented my immune system, and the crumbs were the cancer cells. I would let the birds eat their fill, and then I would visualize a bright white light entering my head and traveling down through my body, cleansing me.’”