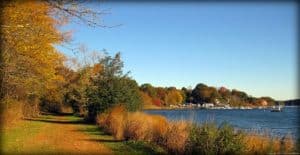 Established in 1995, Scalloptown Park & Wildlife Habitat once served as the landfill for the Town of East Greenwich. A paved path leads up the hill to the park and over twelve acres of mowed field, tall grasses, red sumac and wildflowers. In your mind’s eye you can travel back through history and imagine a landscape overflowing with plastic bags of garbage, plastic bottles and the flotsam and jetsam of discarded household products – both metal and plastic. And, you may wonder whether any metal toxins or microscopic microplastics have leeched out of the landfill and into the ocean. That’s a good question.

A park sign board at the far end of the parking lot offers a map and shares a brief history:
“In the past 200 years the waterfront has run the gamut from slave trading to industrial fishing; from the Scalloptown scandal to a prime source of livelihood for the town; from a bustling port of entry to a yachtsman’s dream of a safe harbor.”

After studying the map, you follow the paved path south and turn right onto a side path that dips down. At the bottom of the dip you find a hidden path through the brush that leads down to the river. You descend carefully, down an embankment covered with large stones, until you can see where the river flows out from beneath the Bleachery Bridge. The water looks a bit muddy, with sediment, and from here the water flows around to the left and enters Greenwich Cove.

You heard that in the 1930’s and 1940’s, children would go shellfishing out beyond where the river poured into the cove. They would find oddly colored scallops, quahogs and oysters… evidence of what dyes were being used in the textile mill that once existed upstream along the river. Toxic metals were once used in certain dyes for coloring fabric. In your mind’s eye you can imagine water flowing out from beneath the bridge, colored a deep dark purple or a blood red. It makes you shiver.

History tells us East Greenwich was once Rhode Island’s leader in scallop production. Scallop fishermen harvested scallops using three-foot dredges, usually towed behind a boat. They brought their catch ashore to shacks, where the shells were opened and marketed.

An East Greenwich quahogger, David Drew, shares his childhood memory of these “opening houses” that lined the cove. The houses had benches on either side, and the openers would stand there and open as many scallop shells as they could.  Drew said, “if you couldn’t open them, you couldn’t market them, The money was in open scallops. A friend of mine, his mom and his sister were openers.” He also remembers sleeping on a pile of new burlap bags while they worked.

Scalloptown was the name given to the area of shore front running from King Street to the foot of London Street. According to legend, fishing shacks built on piles along the waterfront were once a haven of crime. Over-fishing, pollution and concern about public safety brought about the decline of Scalloptown after its peak in the 1930s. The shacks were demolished in the Hurricane of 1938. The scallop trade ended in the 1950’s, with the demise of the scallop population. Over-harvesting was one causal factor, however, land development, soil erosion and more pollution combined to destroy the eel grass habitat that scallops rely on.

Wendy Fachon is the host of the Story Walking Radio Hour, a regular contributor for Natural Awakenings and a creator of environmental curriculum for The Empowerment Factory.