Adventures of Runnergirl 1953 with Mary McManus 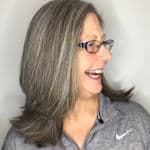 Mary McManus was once known as “Easy Out Alper” in gym class. She contracted paralytic polio at the age of 5 but she managed to run the 2009 Boston Marathon at the age of 55. When Mary was diagnosed with Post-Polio Syndrome, a progressive neuromuscular disease in December 2006, she decided she was not going to take the diagnosis sitting down. She got still and asked for Divine Guidance. The answer came in the form of a poem, “Running the Race” followed by many poems that, through the power of visualization, inspired her to heal mind, body and soul. The poems opened a portal to healing, hope, possibility, happiness and joy as she imagined her future free from the shackles of her past. In May 2007, Mary took a leap of faith leaving behind her award winning career as a Social Worker at the VA to heal her life.

Mary’s quest to heal her life led her to the sport of running that tested her mettle while fueling her journey of transformation from a survivor of childhood paralytic polio and severe trauma at the hands of family members to a woman who embodies faith, grace under fire, courage, determination, endurance and resilience.

“Running the Race” foreshadowed her Boston Marathon run despite all appearances to the contrary. As Mary sat in a leg brace, using a cane and a wheelchair for mobility, and having been told to prepare to spend the rest of her life in a wheelchair, Mary imagined herself winning a 10K race. Out of the rubble of her past, Mary dug deep to discover the treasure of who she was always meant to be. Her Spirit shines with brilliant resilience as she conquered every challenge going the distance on the roads and in her life.

Mary holds a BS in Communications from Boston University, an MSW from Boston College and many fond memories of her veterans and their families who blessed her life when she worked at the VA . She lives in Chestnut Hill Massachusetts with Tom, her husband of over 40 years and their beloved cat Jamie. www.marymcmanus.com