The Journey to Self-Love Through Burlesque, Family, and Homemade Italian Food. -With Angie Pontani, The Italian Stallionette 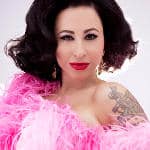 10-28-20 The Journey to Self-Love Through Burlesque, Family, and Homemade Italian Food. -With Angie Pontani, The Italian Stallionette

Tired of always fighting some sort of injustice? Whether it’s ageism, sexism or fighting against the traditional (and totally unattainable) standards of female beauty, sometimes the only thing we want, is to relax and enjoy life. Angie Pontani shows you how to fall in love with yourself as you are, and enjoy food, family, and life as it comes.

One of today’s top burlesque performers, Angie Pontani, The Italian Stallionette, dazzles on stages around the world, as well as carries her art into other fields and genres, including her popular cooking blog, fitness, writing and television. This Brooklyn bump-n-grind bombshell has spread the gospel of burlesque across the globe. The New Yorker calls Angie, “first rate, the perfect centerpiece!” and rightfully so, as her signature acts and productions set standards of style and class.

An award winning entertainer, Angie holds burlesque’s highest honor, the title of  Queen of Burlesque, Miss Exotic World as given to her by the Burlesque Hall of Fame in Las Vegas, Nevada. She was named Coney Island’s Miss Cyclone, in honor of the world famous roller coaster and has been cited as one of the world’s leading burlesque performers by multiple media outlets. She was named Best International Touring Artist, by The Naked City/Alternative Media Group of Australia.

Angie’s performances, choreography and show curating skills are frequently sought by discriminating clients including Lady GaGa, with whom she has worked with on many stage, screen and print projects.  Other clients have included Snoop Dog, Dita Von Teese, Bettie Page Clothing, Campari, Esquire Magazine, The Fox 5 Super Bowl Party, Donatella Versace, 50 Cent, and The Guggenheim.  She is a staple headliner at Viva Las Vegas and has worked exclusively with Hendricks Gin to create her glass bathtub act, which has been the featured entertainment at many of their events throughout the U.S.  Angie has appeared multiple times on the Conan O’ Brien Show and Gossip Girl and has also been featured in other New York productions including Delocated, Good Morning America, and The Today Show.  She was honored to be the subject of an episode of PBS’ Driving Jersey, in which the show followed her back to her hometown of Trenton, New Jersey and took an in-depth look at what it means to grow up Italian-American.  She appeared in Michael Imperioli’s directorial debut film, The Hungry Ghost and has appeared in several Italian television programs, including the SKY UNO series, Lady Burlesque.

Angie was featured in the Lady Gaga and Tony Bennett’s; Great Performances television special, as well as in the cover art for their Grammy winning album Cheek to Cheek.  She has been photographed by some of today’s leading photographers, including Bruce Weber, Ellen Von Unwerth and Steven Meisel.

Angie regularly posts classic Italian recipes from her family as well as her own creations on her popular blog. She has also hosted her own podcast, The Pontani Pages where she has interviewed such diverse figures as Eli Miller, Brooklyn’s beloved seltzer delivery man, to rapper Taleb Kweli.  She is the co-producer of The New York Burlesque Festival, the world’s longest running and largest burlesque festival, as well as the producer of Burlesque-A-Pades, the touring stage show.  Angie created a fitness craze with her dance workout cult DVD series Go-Go Robics, a 1960’s style fitness workout. Angie has partnered with both Crunch Gym and World Dance New York on fitness programs and additional DVD releases.

Angie has modeled for Secrets in Lace lingerie and graced the covers and pages of many magazines including CR Fashion Book, Inked, Pin Curl, Page Six, Glamour, Spanish GQ, Java’s Bachelor Pad and countless others. Angie even made a sexy cameo in Eric Powell’s comic, The Goon (#36).

Angie lives in Brooklyn, New York with her husband, band leader and frequent co-collaborator Brian Newman and their beautiful daughter Sistilia. When she isn’t working, she enjoys being a stay at home showgirl mom and dressing her child in oversized matching head bands.

Be on the lookout for her comprehensive new burlesque project at www.burlesquegalaxy.com.

Still want more? Of course, you do! Purchase Lora’s book, FLAUNT! Drop Your Cover and Reveal Your Smart, Sexy & Spiritual Self wherever books are sold.