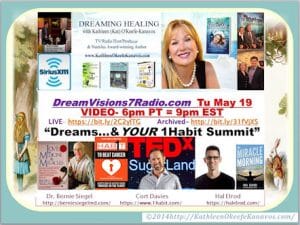 1 Habit in your life could be lifesaving. Do you know what that 1 Habit is? Cort Davies and Dr. Bernie Siegel know and are here on Dreaming Healing to share the 1 Habit that saved their lives, which has become a 1 Habit Summit to help cancer patients, their loved ones and health workers and worldwide. Cort Davies is the MC of the 1 Habit Summit, and the book series by the same name gives you the code to unlock your greatness within. It does that by taking you on a journey and teaching you the core Habits that successful people throughout time discovered and used every day of their lives. Your so-called inner pain and anguish are the fuel for your hidden superpower that can let you accomplish anything you want. Once you know the Habits that flip the success switch on in your life, it takes JUST 1 HABIT to change your life. 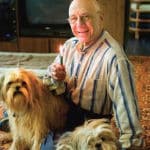 Dr. Bernie Siegel- Dr. Siegel, who prefers to be called Bernie, not Dr. Siegel, was born in Brooklyn, NY. He attended Colgate University and Cornell University Medical College. He holds membership in two scholastic honor societies, Phi Beta Kappa and Alpha Omega Alpha and graduated with honors. His surgical training took place at Yale New Haven Hospital, West Haven Veteran’s Hospital and the Children’s Hospital of Pittsburgh. He retired from practice as an assistant clinical professor of surgery at Yale of general and pediatric surgery in 1989 to speak to patients and their caregivers. In 1978 he originated Exceptional Cancer Patients, a specific form of individual and group therapy utilizing patients’ drawings, dreams, images, and feelings. ECaP is based on “carefrontation,” a safe, loving therapeutic confrontation, which facilitates personal lifestyle changes, personal empowerment and healing of the individual’s life. In 1986 his first book of many, Love. Medicine & Miracles was published. This event redirected his life. http://berniesiegelmd.com/about/ 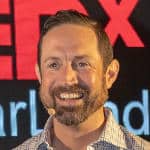 Cort Davies-In 2017, Cort Davies was diagnosed with one of the rarest forms of Cancer on earth called a malignant paraganglioma. He was given just three years to live. Instead of folding under the intense stress of having a late-stage cancer, Cort set out on a mission to save his own life. After seven surgeries, half of his bladder removed, and almost being paralyzed, Cort realized the Cancer and his journey were a gift and that his mindset and his resolve to survive was paramount in healing. He decided to translate this gift into a Docuseries and cancer foundation to help educate cancer patients around the world, how to develop a healing mindset, and how to change destructive habits that could hinder their ability to heal. His goal is to help initiate healing for thousands of cancer patients worldwide. He is also the MC of the 1Habit Summit connected to the release of his book 1Habit to Beat Cancer. https://www.1habit.com/  www.cortdavies.com

Call in and Talk with Kat during Live Show with Video Stream: Call 646-558-8656 ID: 8836953587 press #
Have a Question for the Show? Go to
Facebook– Dreams that Can Save Your Life
Facebook Professional–Kathleen O’Keefe-Kanavos
http://kathleenokeefekanavos.com/