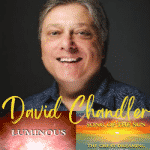 I was super excited to interview my dear friend David Chandler! This is the second half of the interview that I did with him on 12/17/21 – This week we will listen to some of his newer songs and David and I will discuss what they are all about.

David and I met about 10 years ago at an event in Woonsocket, RI. The back story is that I was having visions of sunflowers, and they would appear randomly for about 3 weeks – However, I could not figure out why I was seeing them. On a Saturday afternoon, I was going to an event to see another Psychic and friend, Roland Comtois. I walked into the space that the event was being held and was looking for a place to sit. It looked like an old church inside with rows of pews. I stopped at the end of a row, and I recognized David from his FB photo – He came walking over and said, “it is so nice to finally meet you, I was waiting for you”, and then he said “I have something for you.” He handed me a CD, and on the cover of that CD, was a picture of a sunflower, as well as the title of the CD – “SUNFLOWERS”. Coincidence? I think not!! When I turned to see the speaker, who was up in the front, I noticed on either side of the pedestal that he was standing at, there were 2 very large vases of Sunflowers!!

Needless to say, David and I struck up an immediate friendship. I love his music and his ethereal voice, and David as a person is an amazingly talented and gifted human being. I feel that David is an Awakened Human and has a true understanding of what is happening in the world and where the future to the human race is going. He is part of the journey – to help AWAKEN THE PEOPLE OF EARTH with his music. I hope you all enjoy this interview!

A little about David Chandler:

David’s Sonic Journey has evolved over the past three decades in many areas of creative expression. As a singer/ songwriter, he has released 6 CDs, co- producing with David Correia, seven- time Grammy Award nominee, and two- time Grammy Award winner. His instrumental work has charted in the Top Ten in New Age radio. There are currently 6 instrumental CDs available on David’s website.

David has enjoyed a full spectrum musical life in performance and recording and has a long history of exploring the Healing Arts through sound and music in many forms since the1980s.

He studied Behavioral Sciences and Therapeutic Music at Lesley University in Cambridge, MA, USA. His academic research was in the area of Energetic Anatomy and Sound. As a therapeutic sonic explorer, David has used Vibroacoustic Therapy and many of his own clinically proven soundtracks to assist in the tuning of the human instrument over the past 30 years.

He believes in “bigger and better” things for our consciousness and recognizes the potential for our conscious evolution, both personal and collective. David’s mission is to awaken as many people as possible to the deeper dimensions of our existence through sound and music.

David believes that sound is the carrier wave of consciousness and is an amazing tool to access and orchestrate our individual and collective transformations. There has never been a more poignant moment in history for this Mission.

David’s latest work is a 10 song CD “Tears of Light” (from his “Song of The Sun” series) is dedicated to the Humanity’s Global Awakening, and will be released in early 2022.

You can find his work at: www.songofthesun.com  His facebook page is: Songofthesun