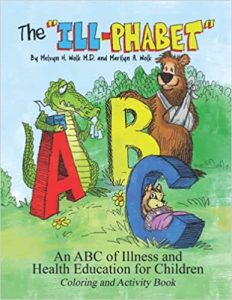 The Ill-Phabet is a natural outgrowth of Dr. Wolk’s caring for children’s needs and trying to make their illness a little less “scary”.

With verses written in “Seussical” style and fun artwork, the Ill-Phabet is an interactive coloring book for children of all ages.

Melvyn Wolk M.D., established The Ronald McDonald House of Scranton, attended the University of Vermont Medical School, and did his residency program in Pediatrics At Bronx Municipal Hospital Center. While in the U.S. Air Force, he became Chief of Pediatrics at Randolph Air Force Base in San Antonio, TX. In 1965 he moved to Scranton, PA., where he established his Pediatric Practice, then became Board Certified in Allergy and Immunology. He served as Chief of Pediatrics at CMC (Community Medical center) in Scranton for over 25 years and was responsible for establishing the first National Intensive Care Center in the area. Realizing the parents of sick children being cared for in the hospital needed a place to stay close to their children, he established The Ronald McDonald House of Scranton. Dr. Wolk says, “The house is an oasis of comfort in a mighty sea of chaos.”

Purchase The Ill-Phabet on Amazon