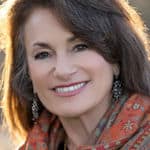 Rabbi Tirzah Firestone, PhD, is an author, Jungian psychotherapist, and founding rabbi of Congregation Nevei Kodesh in Boulder, Colorado. Ordained by Rabbi Zalman Schachter Shalomi in 1992, she is a leader in the international Jewish Renewal Movement and a renowned Jewish scholar and teacher.

Raised in an Orthodox home in St. Louis, Missouri, Tirzah’s spiritual curiosity called her to search beyond the confines of her family’s strict Jewish upbringing. The younger sister of the groundbreaking radical feminist, Shulamith Firestone (The Dialectic of Sex, William Morrow & Co: 1970), Tirzah left home to embark upon a life-changing spiritual odyssey, chronicled in With Roots In Heaven: One Woman’s Passionate Journey into the Heart of Her Faith (Dutton, 1998).

After immersing herself in a wide variety of spiritual practices and world-views, Tirzah returned with fresh vigor to Jewish studies and became a rabbi in a pluralistic and egalitarian Judaism. Her studies in the feminine wisdom tradition and Jewish mysticism yielded The Receiving: Reclaiming Jewish Women’s Wisdom (Harper San Francisco, 2003). Her passion to share an inclusive and joyous Judaism led her to serve as a leader in the international movement for Jewish Renewal and on the board of Aleph: Alliance for Jewish Renewal. Tirzah’s passion for human rights and for the prophetic vision of Judaism led her to Rabbis for Human Rights, North America, now known as T’ruah: The Rabbinic Call for Human Rights.

Tirzah earned a masters degree in counseling at Beacon College in Boston, Massachusetts in 1982, and a doctorate in depth psychology at Pacifica Graduate Institute in Santa Barbara, California in 2015. Her cutting edge research on the impact and healing of collective trauma draws on the fields of neuroscience, psychology, Jewish literature and mythopoesis. Her groundbreaking work called Wounds Into Wisdom: Healing Intergenerational Trauma (Monkfish, 2019) employs interviews, case studies, and her own autobiographical narratives to demonstrate how trauma residue passes from generation to generation and how it can be transformed.

Now Rabbi Emerita of her congregation, Tirzah maintains a private practice in depth psychology, and teaches nationally about modern applications of ancient wisdom and ancestral healing: how to transform patterns of suffering from our past and bring forth clarity, wisdom, and blessings for ourselves and those who come after us.

In 2019, upon the release of Wounds into Wisdom, Tirzah embarked upon a national book tour, facilitating workshops on intergenerational trauma healing from Philadelphia to Berkeley. Get in touch at info[at]tirzahfirestone.com to schedule Rabbi Firestone’s visit to your community.
https://www.tirzahfirestone.com/

Tirzah lives in Colorado with her husband David. Together they have three grown children, Brianna, Emily, and Dakota. Connect with Rabbi Firestone on facebook and on instagram & twitter @tirzahfire.