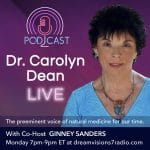 There is widespread controversy about the use of colloidal silver. Is it safe, is it effective, how do I know what product to trust?

On tonight’s radio show, Dr. Carolyn Dean talks about the relationship between the body’s immune system and the natural element of silver.

Silver can be considered as a necessary nutrient in the body because it is systematically concentrated in the body to a much higher level than occurs in nature. Since most minerals have been proved to be depleted from our soil and water, the same can be said for silver. Silver ions weaponize white blood cells (WBCs) to do their work. Silver assists the WBCs and the immune system to attack infectious organisms. And what is also known various bodies of research on yeast overgrowth is infectious organisms have gained the upper hand and overwhelm our ability to keep them under control.

In fact, it can be confidently declared and scientifically proven that the silver ion is far safer than antibiotics or any other antimicrobial ever created. The characteristics of the silver ion far exceed the capabilities of patented antibiotics, which cannot keep up with bacterial organisms’ ability to mutate, nor do antibiotics work against viruses. In addition, antibiotics have many side effects, such as yeast infections. This is because antibiotics travel deep into the intestinal tract, where they kill the good bacteria along with the bad. It is also known and documented that taking antibiotics over a long time period weakens the body’s immune system.

Along with its impressive function as an antimicrobial, consider these other characteristics of Pico Silver:

· Silver has the highest electrical conductivity of any metal.

· Silver ions are highly effective and the body’s response is nearly instantaneous.

· The silver ion is an integral and important part of the body’s immune system response to infections and disease.

· The DNA of the body is already pre-programmed to utilize silver to fight infections and disease.

· Silver ions are absorbed into the bloodstream and transported to all of the tissues of the body and stored on the surface of white blood cells.

· The silver ion aids the body’s ability to “find” the focal point of treatment, through the body’s cell signaling mechanisms – its electrical conductivity.

· The silver ion aids the body’s ability to “digest” the pathogen.

· The silver ion aids the body in the correction of the associated complex metabolic consequences associated with long-term infectious states.

· The effects of the silver ion in anti-aging approaches is very promising although clinical research has not been fully funded.

· The silver ion has a beneficial effect upon co-infections simultaneously.

· The silver ion will readily pass the blood-brain barrier, allowing for interface and intervention with neurological diseases such as ALS, MS, polio, spinal meningitis, and viral encephalitis.

· The silver ion is known to negatively affect bacteria through: lethal oxidation, an “intermolecular electron transfer,” resulting in electrocution; a binding and chelating to essential pathogen receptor sites, which defeats the pathogen’s mechanisms of invasion into host cells; an ion non-dependent heightened catalytic action; and cleavage, which fragments (and thereby destroys) essential pathogen/proteinaceous structures.

· Once the silver ion ruptures a bacterial staph infection or certain fungal infections, the remaining silver ion particles begin to act as an antidote to the resulting poisons lessening the Herxheimer reaction.

· The silver ion has a very high therapeutic value because there is no known lethal dose for silver ions.

With all that cellular power, you would expect the testimonials to be profound and pervasive, and indeed, they have been! Enjoy this testimonial from one of our dog-loving customers who used Pico Silver in a critical situation:

Fred, our French Bulldog got loose and was hit by a car. We rushed him to the vet and they set his leg and placed in a cast with very specific instructions on how to care for his leg and keep his cast dry. We followed the directions to the letter but within 10 days his wound became septic and the vet wanted to amputate his leg. Fortunately, my buddy Gregg rushed over to my house with Pico Silver. We swabbed his leg hourly and added the solution to his drinking water. Within 3 days his wound was healed and the vet withdrew his recommendation to amputate. Thank you so much Dr. Dean for this product. We now have several bottles on hand.

Dr. Dean takes questions via email. Please write questions@drcarolyndeanlive.com
We will be glad to respond to your email