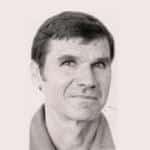 Michael Tymn is one of the world’s leading experts on the best afterlife evidence. In this, his sixth Seek Reality appearance, he talks about his own longstanding skepticism about the afterlife, which is now reduced to something like one percent.

He discusses some of the reasons why even all the consistent and overwhelming evidence of what happens after we die that is now available has still not been enough to make the truth dawn more broadly.

A big problem has been people who have claimed to be skeptical, but instead have made an art of lying about the evidence. But in the end, we know that the truth always wins